Desktop computers are slowly but surely being replaced by their portable laptop counterparts, but there’s nothing wrong with trying to reinvent the wheel and freshening things up a bit. These designers have done just that with these ten futuristic computer concepts. Continue reading to see them all. 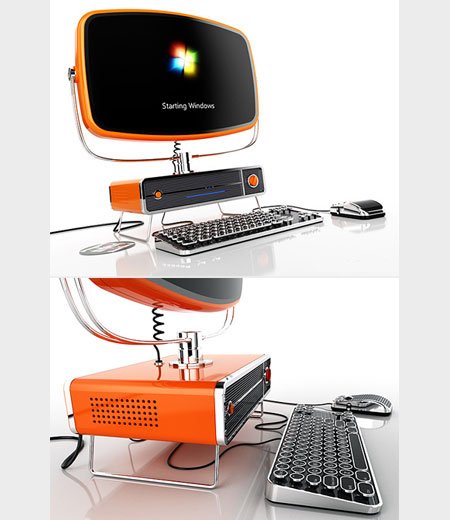 The Philco PC here is a prime example of such inspirations, totally reminiscent of the 1954 design classic Philco Predicta! Indulge in it for the aesthetic value, as for the specs…yea it does host Windows 7. But then again we’re here for the love of design, specs can take a hike for the moment! 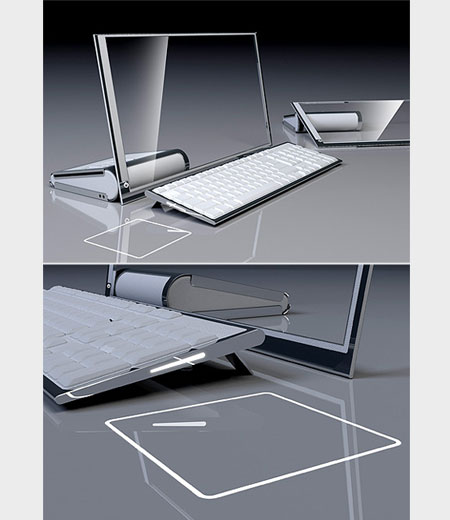 Proposed to be sold as a stand-alone unit the HP LiM (‘Less is More’) concept is set to feature a 19″ transparent touch OLED screen along with a wireless keyboard. The touch screen slides down to create a more ergonomic touch experience and easy navigation. It also features a virtual trackpad thus cutting down on mouse costs. 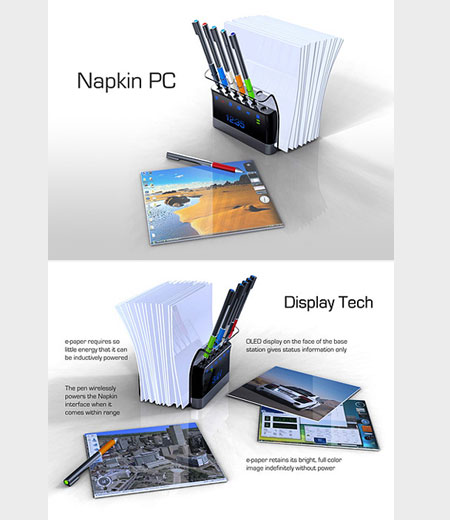 The Napkin PC is designed for group collaborations. Each pen transmits your doodles to the base station which is a PC in disguise. That information gets processed and displayed on the napkin like e-ink paper. Cool idea but someone better make sure nobody decides to wipe their dirty lunch stains with one. 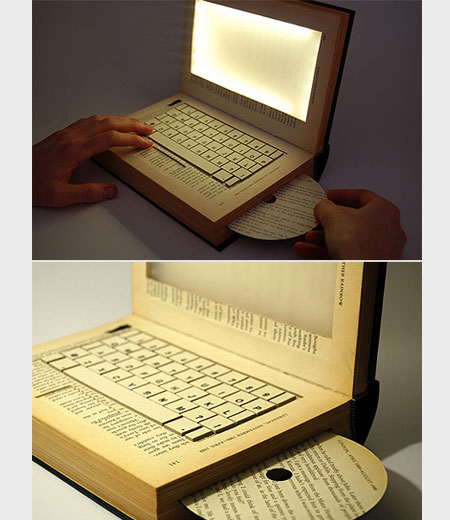 The book/laptop, has a CD-Rom drive complete with CD, a keyboard that can be removed so as to access the battery, and a switch that turns off the screen light once the book is closed. The book when closed, looks just like a regular book until opened. The words, “The Future of Books” is inscribed on the spine. I think Kyle did a wonderful job expressing the changes the world is facing regarding technology. 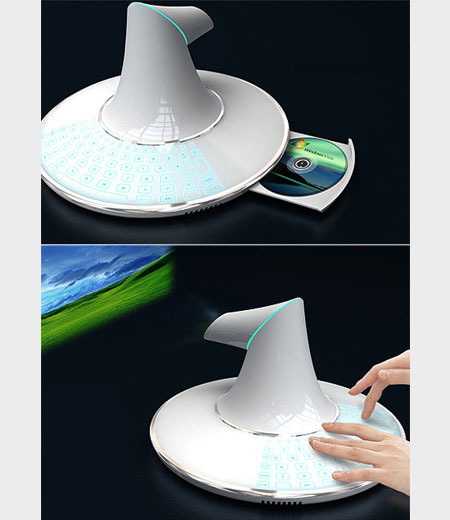 Some highlights of this Kubrick inspired mother ship computer include a membrane keyboard that appears when needed, integrated optical drive and when not used as a computer, the projector can beam ambient light effects on any surface you desire. 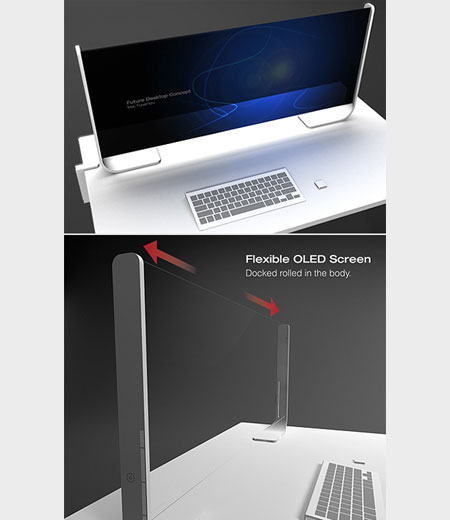 This flexible OLED monitor concept which supposes the OLED material would roll up inside the white stand and allow the user to choose the optimum screen size. Supposing that the material could compact itself that tightly, he goes on and mounts a cd drive behind the translucent screen and for good measure throws some invisible projection technology in as well. 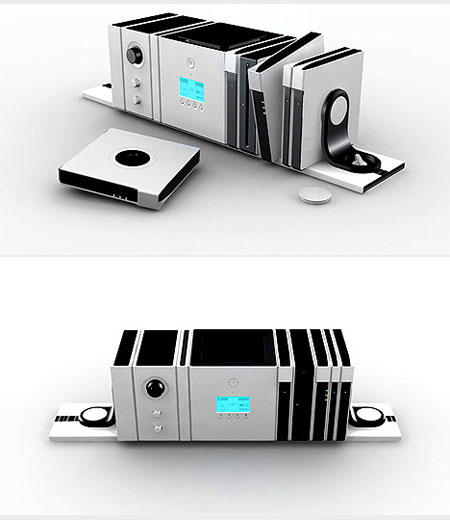 The “Bookshelf” operates with add on hardware attachments supplied by digital service providers which controls the copyright issues but still accommodate convenience and portability that is expected from computer users of today. As the users acquire hardware attachments from digital service providers of their choice, the “Bookshelf” expands into a multimedia library. Each individual hardware attachment is configured to download and play contents and also moderate copyrights. The concept envisions a new infra-structure of digital media and how consumers will interact with them in the near future. 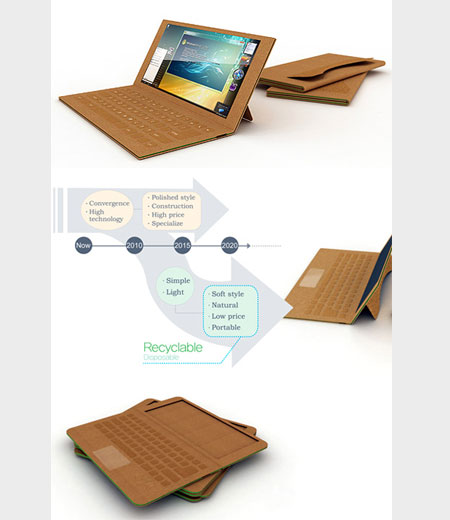 It uses recycled paper or pulp material all packed in layers. This is so that you can easily replace the damaged portions (even corrugated paper will tear easy). The vibe of a Paper Laptop is intriguing, I know eventually someone will figure out the tech bit, so let’s see who will take the bait. 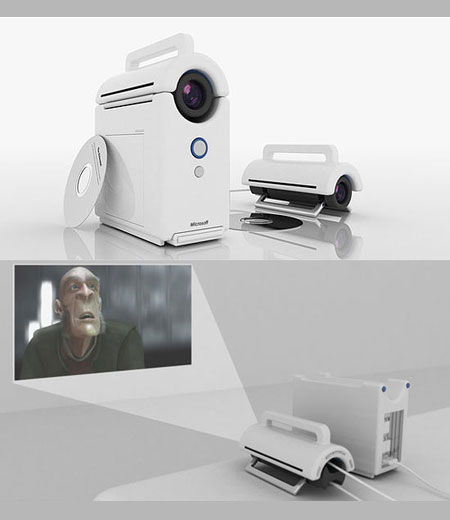 Microsoft’s Portable PC Theater is an object of envy for those in need of a space-saving home entertainment solution. This svelte computer system boasts a built-in projector, CD/DVD drive, and integrated speakers. The Portable PC Theater is one computer designed for pure entertainment. In lieu of a display, it has a built it projector which can be removed to better positioning. Don’t worry about sound because flanking the projection lens are stereo speakers. What about messy cords? All cords retract into the unit when not in use and because it is a computer, there’s a collapsible keyboard. 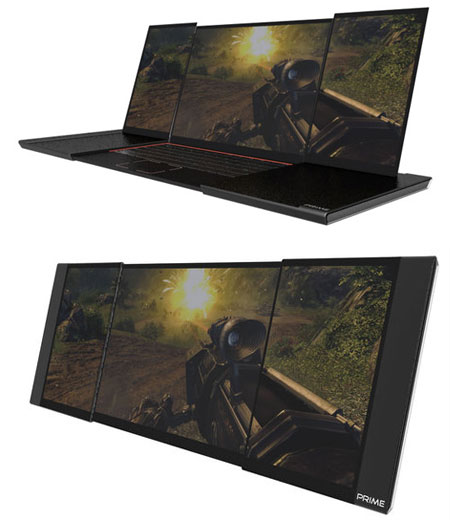 The middle screen is just 10 inches in size while extra screens on the left and right add the extra 16 inches to the total screen size making a total aspect ratio of 32:10. The body of the Prime Gaming Laptop is made of aluminium and large vents can be found which keep the 2 CPU’s and GPU’s nice and cool.

I took a chance on myself and invested in my growth as a level 5 computer learner. With hard work, tunnel vision, a great trainers and accountability partners, I managed to complete the course. I would recommend this course to anyone. You’ll 10 times multiply in your confidence and as for a best result come see for yourself.

A lively broad course involving individual topics which gives a wide range of computer applications web design to word processing and from programming to ebusiness taught in a friendly environment by friendly tutors.

This excellent workshop gave me the encouragement and knowledge I needed to focus on my business idea and shape it into a basic business strategy. Lots of practical advice on how to run a successful business was given.  I’m looking forward to the Start Your Own Business course on Thursday.

I really enjoyed my time at Mohill Training Centre. It was many years since I completed any course and I was apprehensive starting due to my lack of my computer skills, but the tutors made it easier. They are mindful of each student’s level, teach, and support accordingly.  With each module, my knowledge and confidence increased.  I am grateful to all the staff at MCT for the positive effect this has had on my career going forward. I would highly recommend this course and training centre. … END_OF_DOCUMENT_TOKEN_TO_BE_REPLACED

Being an immigrant with strong technical and mechanical background, this course has armed and shifted my passion. The tutors’ expert knowledge and accommodating style have converted me into considering ICT/ ICS as my upgrade passion at university level. The learning atmosphere , the different modules and their contents suited my learning style. I am glad that I participated in the course.  Santu Dube

I felt the course was very compressive. The content was very wide ranging and detailed. Our tutors were most professional, courteous and at all times helpful and encouraging. I have taken several courses at Mohill Computer Training and I have always found the above to be the case.

I started the full time Level 5 course in September 2021. Since completing the course, I have definitely improved my computer skills. Margaret and Feargal were the best tutors for this course. Both of them were extremely helpful and patient, which helped me to excel. I now have greater understanding of how to use all of the office applications, and now more opportunities are available to me – whether it’s in the working world or further education.

All the modules were comprehensive and delivered to a high standard. The tutors were helpful and ensured we had a good understanding of the subjects. I have learned a lot of new skills during the course and feel confident in the abilities I have learned during my time on the course.

This course has been, by far, the most positive and supportive learning experience I have ever had. It has revived my interest in learning.

The supportive environment and exceptional work by the instructors have helped me learn how to effectively apply myself to work, and has allowed me to shake off my previous negative feelings towards learning environments.

I really enjoyed my time at Mohill Computer Training. I needed to upskill and this course gave me new opportunities. The tutors made the whole experience very straight forward and enjoyable. They are very patient and supportive. We also managed very well during the pandemic with blended and online classes.

The course is broken down into separate modules so it’s not overwhelming and caters for all levels. I found it challenging at times but in a good way. It gave me more confidence and helped m… END_OF_DOCUMENT_TOKEN_TO_BE_REPLACED